The Epiphoni Consort follow up on their acclaimed debut, of music by David Bednall, with a portrait album of another young choral composer on the ascendant.

Owain Park’s musical tracks were set early, when he joined the choir of St Mary Redcliffe, Bristol as a boy chorister. Subsequently organ scholar of Trinity College, Cambridge, he draws – while still only in his twenties – on a specially English tradition of text-setting and choral writing which links him to figures such as Stanford and Vaughan Williams.

His innate understanding of the medium is shown in the skilfully contrasted weights and colours of Shakespeare Songs of Night-Time, one of two Shakespeare cycles included here, and the Epiphoni Consort singers make the most of the luxuriant chordal writing that characterises Park’s style as a whole – what his former teacher John Rutter has described as ‘towers of sound’.

The choir is joined by a solo violin for the call and response patterns of Antiphon for the Angels, while Sing to me, windchimes movingly sets loss and yearning alongside poetic images of spring and youth. 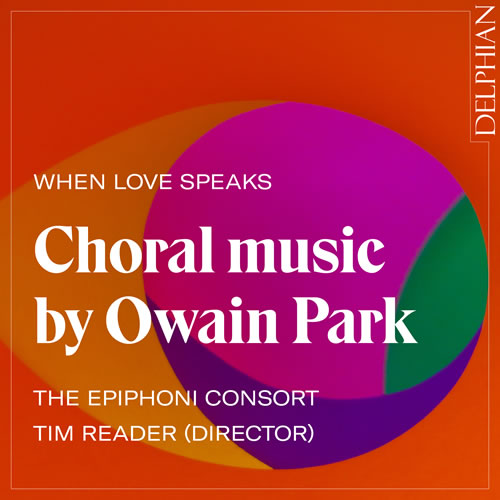 “It’s really difficult to choose a favourite track, but So Sweet a Kiss has to come pretty high up on the list! The shifting harmonies and shimmering colours of the music are mesmerising, and I think they perfectly reflect some of Shakespeare’s most moving poetry. Plus John Robb’s solo is gorgeous…!” – Becky, soprano

“…the final movement of Sing to me, Windchimes, Life has a loveliness to sell,  sets Sara Teasdale’s poem ‘Barter’, an urgent plea to seek out the loveliness in life, no matter the cost. They’re simple words, but achingly poignant, and all the more so in the light of Teasdale’s own story. Owain Park’s setting is exquisite, perfectly capturing the moods of the text: simple beauty, ecstatic joy, and perhaps, too, a hint of desperation or regret. It’s a wonderful ending to the suite, commissioned by Louth Choral Society in memory of member Gill Fraser.” – Adrian, bass and committee member

“Louisa – is one of my favourites of the album. A setting of a poem by William Wordsworth, it transports me to a woodland stream shimmering in the dappled sunlight of a spring afternoon.” – Jess G, alto

“I could have listed them ALL as my  favourite track, but one in my Top 5 for sure is the third movement from Sing to me, Windchimes – Star of the Frost. The insane amount of emotion, drama and passion packed into the short 2 minutes really moves me, and this movement (along with all of Owain’s works!) is just such a pleasure to sing” – Jess H, alto